8/18/2017
Dr. Randy Watts
Once upon a time, there were three little pigs. Each little pig had a house to build so that he could live happily ever after, presumably in comfort with his family, possessions, and pets (if, of course, pigs have pets). Each pig decided to build his house out of a different material. One chose to build his house out of straw, one out of sticks, and one out of bricks.
I expect that this story sounds familiar. We all know what happened to two of the three little pigs who faced a huffing and puffing wolf. Their houses of straw and sticks fell, and they became very, very sad. They tried to cut corners and paid the price.
So, now let’s talk about the third little pig. What choices did he make? Well, he chose to build a foundation. His home needed to be stable and grounded. He selected materials that would do the job; they may not have been the easiest materials to find, simplest to work with, or the cheapest, but they would yield a home that withstood the elements — including huffing and puffing.
If we take some liberties with the story, I imagine that he consulted with other knowledgeable pigs. He sought piggy architects, engineers, and brick workers. The likelihood, then, is that his home was build with a wise team of experienced experts who wanted him to be successful.
This year, we selected the theme “Build” to indicate what we are building at Brookwood. Our foundation of success was laid many years ago, but we must continue to fortify it, as our founders did before us. Our leaders built traditions. They built academic excellence. They built a high-quality athletic program. From day one, spirituality has been a central building block to our work; God and prayer have always been included in school life at Brookwood School.
This year, we focus on a continued tradition — shoring up that foundation by building leaders, community, character, momentum, and Warrior Spirit.
All of our students are building their own foundations. Brick by brick, they are making decisions and choices that help them to construct lives of importance and meaning. The foundation that is built in their younger years will fortify them to grow as much as they would like; that foundation will embolden them against wolves, bad weather, or whatever else life throws at them.
Our goal at Brookwood is help students build lives of success. While we are a college preparatory school, we do not want to simply get them into college; we want them to be prepared for life.
Alarmingly, recent studies have shown that many college graduates don’t have all the building blocks they need; they’re going out into the world unprepared for the work with which they’re tasked. In a recent study published by the Association of American Colleges and Universities, young grads report that they believe they are much more prepared across key learning outcomes than their employers report: 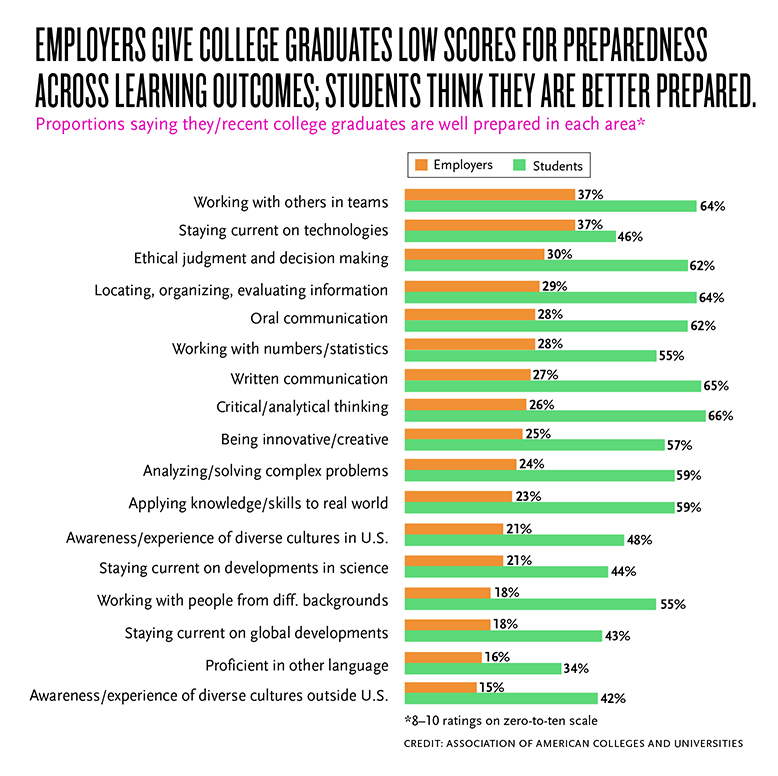 In fact, across all indicators, college graduates grossly overestimated their competence relative to the perspective of their employers. This is consistent with past AACU surveys — that employers of new graduates are concerned about their range of skills, especially in the areas of communication and teamwork.
So, why does this disparity exist? Why are today’s college students not as prepared for the world of work as their employers want them to be?
Ask the third pig. He’d likely say that if you want your children to learn to build, teach them first that they need to start with a solid foundation.
Back